Have you ever said or heard anyone else say any of the following phrases:

"That's so gay" ; "You're retarded"; or "That's so ghetto"
I'm sure many of you have. How did you feel after using any of those phrases or hearing someone else use them? Some of you probably thought to yourselves "its just another slang phrase and it's no big deal," right? Some of you may have felt uncomfortorable, yet kept your thoughts to yourselves. Some may have wanted to make a remark, yet didn't know how to or what to say. Well, believe it or not, saying these phrases can actually be indicators of a hidden or unconcious "bias" in our minds that we are completely unaware of. These hidden biases are believed to not only affect our own behaviors, but also distort the way we interpret other people's behaviors around us.
Bias is defined as perpetulated socialization by a culture at large. A strong example 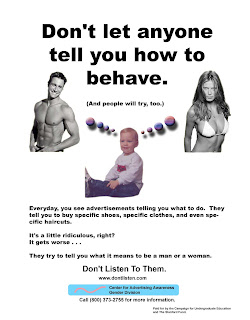 of this is media. The media often paints people or things to be a certain way and classifies them among a certain stereotype. For example, due to mass media people are pressured to believe that only tall skinny models resemble beauty, that old people are weak and forgetful, and young people are full of more energy and brainpower. However, not every single person in the world falls into those stereotypes. Another example would be our casual "slips of the tongue". When we are placed in tense situations we are more likely to portray our true implicit attitudes and say things we didn't really want to say.
Many old and recent studies have shown a significant link between hidden bias and actual behavior. So basically hidden biases can reveal themsevles in physical actions. Some of these actions include eye contact, blinking rates, and number of smiles. The following are some very interesting examples:

* One experiment showed that white interviewers sat father away from black applicants than white applicants during an intervew process, made more frequent speech errors, and ended the interviews at about 25% sooner.
* Another study found that when women were constantly being reminded that they are bad at math, their performance started to fulfill this prophecy. ( hence the term self-fulfilling prophecy)
* One other study showed that subjects who had stronger hidden race bias in their brains had more activity in the part of the brain that deals with emotional learning when shown black faces than when shown white faces.

All of us are bound to have some kind of hidden bias that we are unaware of. Determining what exactly the hidden bias locked up in our minds is could be the first step towards understanding them and changing them in order to become better people. Fortunately, there have been many tests developed over the years to help people uncover some of the possible hidden biases in their minds and the results can be surprising! You can try one at this website: