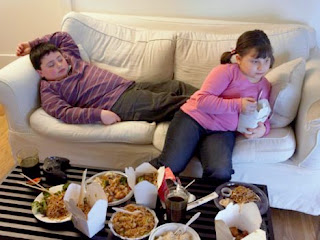 Overall, people in America are more lazy now than they ever have been before. Childhood obesity rates are through the roof because our society has allowed them to be. Chapter 12 of our textbook talks about our choices we make based on least effort, more specifically body consequences. How many times have you taken the elevator instead of the stairs? Or how about vegging out on the couch instead of going to the gym? God forbid anyone actually get up to change the channel on the television when the remote is missing! These are all examples of how we choose to do activites that exert the least amount of physical activity.

The trend for people becoming overweight and even obese is rising. When weight increases so does BMI. As BMI increases so do a string of health problems including diabetes, heart disease, cardiovascular disease etc.

I have seen the effects of body consequences of least effort in my own family. All of my dad's side of the family are very overweight and even obese. Two of my aunts and a cousin have had gastric bypass but over the years, they have returned to their original weight. They have no exercise in their daily routine and do not eat healthy at all. My grandmother always said she hated vegetables and would never eat anything green! I guess that would be where her children got their diet from.

My father, mother, sister and I have been fairly health conscious over the past few years. With my sister being an athlete and being recruited for NCAA Division 1 schools, she maintains a strict diet and workout routine. My parents support her by trying to do the same. Since I started living on my own last year, I have to admit that I was slacking when it came to putting effort into anything let alone a diet. But for about 2 months now I have made what I hope to make a lifestyle change regarding my diet and exercise and have lost about 20 pounds. I hope that as long as I keep this up, my future can be a long, healthy, active one!
Posted by RennieK at 8:33 PM