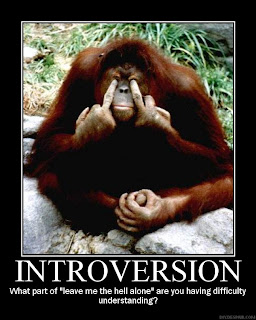 Extroversion, which is one of the Big Five Personality Factors is said to exist along a continuum that ranges from being extraverted to being introverted. The terms were coined by Carl Jung and expanded upon by others, describing the way that individuals think, act, and socialize. Jung believed that a person’s disposition towards one or the other, had to do with the individuals direction of psychic energy in terms of how they think and interact based on how that person gains perceived energy. Introvert's energy flows inward, being more reserved and introspective, gaining energy from being alone. On the other hand an extrovert’s psychic energy flows outward seeking interaction and gaining perceived energy from interaction with others.
These personality traits determine how people react to the situations they encounter in their environment. These traits also can influence the environments that the individuals seek out, or avoid. For example, a quiet night alone may be enjoyable for an introvert, but boring, torture for an extrovert. Whereas, a huge party may be needed relaxation for an extrovert, it may be an introvert’s worst nightmare.
Both of these traits exist along a continuum ranging from extremely extroverted to extremely introverted with ambivert being a mixture of both traits. Stimulation for one end of the spectrum may be considered over stimulation or under stimulation for the other end.
Posted by Papalem at 7:29 PM