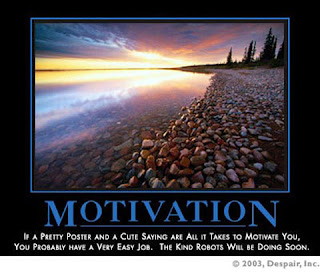 I learned several things in our Motivation class. I learned that there are several different factors that motivate people to complete certain tasks. On the other hand, there are also several factors in which people use motivation to not complete a certain task. Motivation has several levels which may be very basic or may be very complex. Basic levels of motivation is the motivation associated with food and hunger and thirst and drinking. Everyone needs to eat and drink to survive, therefore hunger and thirst are very basic forms of motivation. Motivation may also be very complex. An example of a complex version of motivation would be mate selection because many factors go in to picking a mate. I learned that many famous scientists, psychologists, and philosophers discussed motivation. Socrates, John Locke,and Sigmund Freud are a few examples of the many influential people who spoke about and created theories based on motivation.
Motivation can be found in many aspects of a person's daily life. Addiction is associated with motivation because people are motivated by the high that they get when using psychoactive drugs such as caffeine, nicotine, alcohol, opiates, and cannabis. People continually use psychoactive drugs because they like the "good feeling" or the end result of using psychoactive drugs. An additional way that motivation relates to a person's everyday life is motivation through stress. Stress may motivate a person to do something such as a paper the night before it is due or stress may motivate a person to decide not to do something such as not showing up to class because of an overwhelming amount of tests and projects due on the same day. An individuals personality can also effect their motivation to do something or not. For example, if a person is sociable, then they will most likely show sociable characteristics in each social situation. Creating a self-concept and self-esteem may also be motivations for doing certain tasks. People will be motivated to do a task based on the incentive value or how large of a positive impact the end goal will have.
Motivation for a goal can be broken down into subgoals. Subgoals are smaller goals that lead up to completing a larger goal. For example, a paper may be a small goal that leads a student to try to pass their class which would be the large goal. Many people are motivated to complete a task that seems as if it will exert the least amount of physical and psychological energy as possible. Emotions can also be used as motivation to either complete a task or not complete a task. Motivation is used in all aspects if life and is a very important aspect of psychology.

My favorite parts of the course was the section that explained math anxiety and the section that explained caffeine as being the most highly used psychoactive drug. I liked the section about math anxiety because I related to the story the girl told in which she felt ridiculed by her 3rd grade teacher and ever since then she became nervous when taking math test. The same thing happened to me I was unable to take math tests without feeling extremely nervous after my teacher embarrassed me in front of my peers in 3rd grade math class. Math anxiety relates to my life outside of class because it taught me why I felt so nervous about taking math tests. Also, the studies done about math anxiety made me feel as if I am not the only one who feels this way before a math test. I liked the section about caffeine being the most highly used psychoactive drug because it was very interesting and shocking to find out how many people are addicted to caffeine. Caffeine addiction relates to my life outside of class because my first semester of college I was addicted to caffeine because I was not getting a whole lot of sleep. I learned that to not drink beverages with caffeine in them everyday, but many other people I know still rely on caffeine to get them through each day.