Overview
This class was very enjoyable to take due to the amount of work we were able to cover in such of short period of time. Understanding the basic concepts of motivation gave me a clearer outlook on why people do what they do. A person is motivated when they are “moved into an action or thought by either the push of a motive or the pull of an incentive” (pg 7). Within the chapters of this course we learned about addictions and personal disposition, the different sorts of dieting and all its characteristics surrounding it. We touched the break down of physiological and brain arousal to psychological arousal. We also learned about stress, what causes it, how to cope with it, and the outcome of it/ harmful effects it may have. The second half the course deals with actions and behaviors that effect motivation positively and negatively. It also covers incentive values and goals.
The most common chapter that people go through was the chapter on drug use, addiction, tolerance, and withdrawal, and how they led to the opponent-process and incentive sensitization theories. There are many different parts to motivation and how they are responsible for the motives we use in our everyday behavior and the affect they may have.I enjoyed each section equally only because i have learned about this prior to taking this class but with the power points and the text i was able to expand my knowledge on every unit. 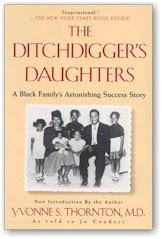 The Ditchdigger's Daughters is the story of Donald Thornton, a laborer, and his wife Tass, a domestic, who managed to shepherd their six daughters into careers of professional status. Consider the results of their efforts: Two physicians, an attorney, a court stenographer, a dentist and a registered nurse. This was an ultimate movie based on a family of motivation. The girls were sheltered from everything because the father believed that we lived in a world filled with distractions and wanted nothing but the best for his girls. He knew that he didn’t come form much so he mapped out a promising future for his daughters. There was this quote that stuck with the girls thought the movie that inspired them to excel because they had to work twice as hard just to make in in that era. "You kids are black. You are dark skinned and ugly. I love you better than I love life. But I'm not always gonna be around to look after you, and no man's gonna come along and offer to take care of you because ain't light skinned. That's why you gotta be able to look after yourselves. And for that you gotta be smart." Sometimes motivation might not be sugar coated but as long as the point is expressed and taken in then that’s all that matters.