The Influential Mind by Tali Sharot

The book The Influential Mind by Tali Sharot discusses how our brains can influence and change others thoughts and actions and vice versa. The author is a neuroscientist who mentions many different studies of her own as well as others that show how in certain situations, people's decisions, behaviors and beliefs can be influenced by others. She also uses short stories about everyday people that allow the reader to relate to the topic and the situations given. From the studies mentioned in the book, most of them directly relate to how the brain works and how if you approach situations a certain way, you can get people to behave the way you want (it sounds more manipulating than it actually is).

One of the first examples the author discussed was how trump's words about 'how vaccines can give your child autism', even when giving false information, made an impact on the public because of how he worded it. In this example it was during the 2016 when Trump (no medical background) and Carson (pediatric neurosurgeon) were debating about whether or not vaccines can cause autism. Carson's tactic during this debate was to talk about how there were many studies done to prove that there is no correlation between vaccines and autism. But, Trump disputed by painting a picture of your precious newborn baby getting a shot with a needle that looks like "it's meant for a horse". He then used a non reputable example of how a two year old got sick and was diagnosed with autism a few weeks after getting their vaccines. What Trump did was plant a seed in the brains of those listening (especially new parents) by tuning into the human need for control while also putting the idea of their child getting sick which induces their fear.

Another one of my favorite parts to this book was when the other discussed Incentives and how they can be applied to your everyday life. The main example she used during this chapter was about how the medical staff in an ICU in New York was reported to have low compliance with washing their hands even when 'employees must wash hands' is posted throughout the hospital. Researchers then conducted a study by placing electronic boards in each room to count each time a medical staff member washed their hands when they entered or left a room. This gave the workers immediate feedback on how well they were doing and they got to see themselves improve throughout the experiment. Originally the compliance rate was around 38%, then after they installed the feedback boards the compliance rate went up to 90%! They even did the same thing in an additional hospital to ensure their results and the same outcome was observed. The reason this worked so well is because the board motivated the staff members to wash their hands with immediate positive feedback rather than threatening them by stating 'employees must wash their hands'. 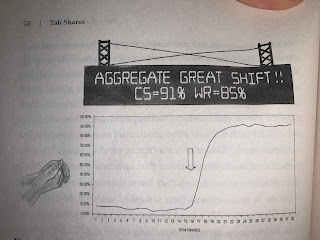 This example is something that I can relate to, given that I have worked in a hospital and know the importance of hand washing and other tasks that need to be done to ensure patient safety. Something that I noticed while working was that on each floor they count the number of days gone by since their last fall and hospital acquired pressure ulcer. There are many ways to prevent these situations from occurring, and it is up to the medial staff to use and record interventions they use to prevent falls and pressure ulcers for every patient. By counting the number each day, it gives the nurses and medical staff an incentive to think about when doing their job. This way, they can do their part to make sure the number doesn't drop back to zero!

The topic of incentives is an important part of this courses curriculum and something that I've learned about the most when reading this book. When relating back to the incentives lecture, the experiment performed in the hospital displayed the proper use of 'reinforces' in order to increase the frequency of the desired behavior (washing their hands). This experiment, along with counting the days since the last fall/ acquired ulcer, also uses incentive values - the attractiveness of an incentive based on objective properties such as a number or amount. This would be either the number of times each person washed their hands or counting the days since the last fall/ ulcer. Lastly, the experiment used in the book could also relate to the contrast-effect of incentive that is discussed in lecture. Positive incentive contrast was used because as the the incentive value increased, the motivated behavior increased as well.

This video shows how a hospital in Canada did a similar experiment by having someone record the amount of times each staff member washed their hands when entering and/or leaving a patients room.
https://youtu.be/QWNFBtH_BcI