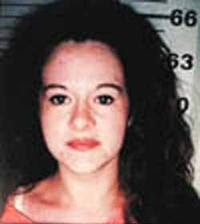 Emotions are defined in the book as a functional reaction to a stimulus event or change, such as an actual or anticipated loss or gain. The physical reaction to emotions are one's persoal choice and can have a negative or positive effect. Most commonly, emotions are associated with relationships. When two people are in a relationship, they usually share feelings and emotions for one another.
This is a photo of Christa Pike. In 1995, at age 18, she was the youngest woman in U.S. history to be on death row. She was convicted of the murder and the conspiracy to commit murder of Colleen Slemmer, 18. Ms. Pike believed Slemmer was sleeping with her boyfriend and she could not handle it. Her emotions led her to believe that this action was a possible means for her to loose her boyfriend; she could not handle it. Emotions can sometimes get the best of a person but the key is to always control your actions. My motto is: "you can not control your feelings or your emotions, but you can control how you react to them". Ms. Pike is now going to loose her life because she did not control her actions to her emotions.
Posted by Fatimah at 9:02 PM