So I’m the girl from class with the four Chihuahuas. That sure makes a statement. It makes some cringe, some laugh and some surprised, when I tell them about the number of madness I have in my home. Originally, I only had one but they started to multiply (fortunately and unfortunately). They are just too cute to give away. My dogs may be exactly what you think, or not quite. Yes, it is true that in temperament Chihuahuas tend to be feisty and vicious, and that’s including mines. However, my dogs are not the type to bark so much. Oh, who am I kidding they do bark their heads off, but they do not attack as other Chihuahuas I have seen. 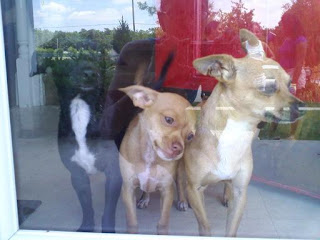 Each and one of my Chihuahuas have different and similar temperaments. The oldest, Blaze “the daddy” is likes to furiously bark at people from the other side of the fence, or window. It all changes when the people are inside the house, he turns more friendly. Lola “the wife,” was given to us about a year ago (without her puppies would not be multiplying right now) and she behaves in such a rare way. I think Lola was abused because she is super shy and does not like anyone other than us in my house. Lily “little girl” is not shy but she would let you know she does not like you by staring at the person and making growling noises. The last puppy, Soly, is quite a little spitfire. She is very energetic and very playful. She likes to bark a lot, and likes people; mind you she is four and half months old. 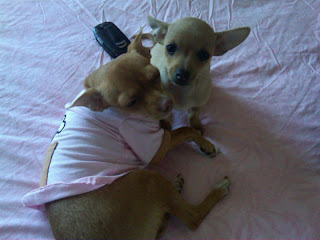 When I am viewing how each of these dogs behave, it becomes noticeable how the puppies have their temperament passed down from their parents. Blaze and Lola are the parents of Lily and Soly. Blaze and Soly are similar with the warmness they display to the visitors; these two also have in common that they do not listen, they tend to misbehave a lot more. In contrast, Lola and Lily are not very friendly and tend to stay away from newcomers. Lola and Lily are great with commands and listening.

It’s quite interesting to see the temperament differences in my dogs. It’s funny to actually see how their emotionality is actually genetic base-inherited.