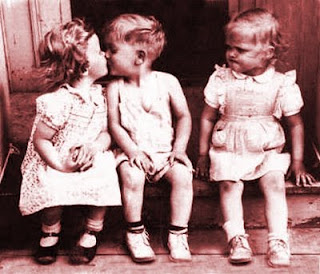 The topic we covered today about mate value and what we look for in our potential mates was very interesting. Last semester I took a course called Sex, Power, & Conflict. I conducted research on mate poaching and partner jealousy. The topic I will be discussing in this post is jealousy. Jealousy is defined as a negative emotion triggered by possible loss of one’s mate.

I found an article titled “Sex Differences in Implicit Association and Attention Demands for Information about Infidelity” that researched feelings of jealousy and infidelity. Thirty-five women and thirty-four men with an average age of 20.4 years old from a Northeastern United States university volunteered for the IAT test. Participants were shown words on a Gateway desktop computer and asked to categorize whether that word had a positive or negative meaning of infidelity. Their reaction speed was timed to help categorize them into groups according to results.

The reaction times did vary between different condition participants which proves there is a sex difference in response to infidelity and jealousy. Women took longer to respond when visualizing an emotional infidelity scenario. This proves that women are more likely to become hurt and jealous when their partner is having an emotional affair. The sexual infidelity scenario results show that men and women had similar reaction time; the researchers concluded men and women alike are both affected by visualizing their partners having sexual relations with another person (p. 578).I personally agree with these findings but I believe the reason men are more upset over sexual infidelity is because the issue of paternity uncertainty comes into play.

Here is a video that shows how to prevent emotional infidelity http://www.youtube.com/watch?v=ogH-zWgkDGc