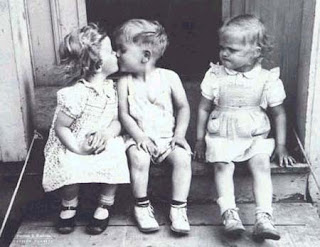 After reading numerous posts on my original topic of choice which was mate value and mate selection, I got to thinking about what more I could add to what has already been said. Most of my peers have already covered what we look for in a mate. Physical attractiveness, personality traits, that magical good looking, hard working smart gene. All these things are what attracts us to a person sure, but what actually keeps us with that person? Is it lust, is it love? Do we genuinely love people for who they are and what they do for us. Do we stay as physically attracted to that same person we drooled over the first time we saw them? I can't speak for the whole world of course but i'm gonna go out on a limb and say no we don't. Attraction fades with time. We grow bored and sick of each other. Monotony sets and you get to know the person entirely too well and then boom, you hate them. This may be a tad extreme but i'm sure you all get the gist of what i'm saying. So the question is over time, what is it that keeps us with these people when every time you see another suitor you wish you were able to go chase after them like a wild animal? My vote goes to that "green eyed monster" called jealousy. Even if you yourself may be happier with another person, the thought of seeing them with anyone but yourself would drive you crazy. The level of how crazy it would drive you probably differs between men and women. The book states that men are more worried about sexual infidelity while women are more worried about emotional infidelity. So in other words gals would be more torn up over seeing their man taking another woman out to dinner, while men would be rather livid over seeing his ex get railed by some other dude. Jealousy also plays a big part in the awful sport of mate poaching. People see someone they are attracted to and then they see someone else enjoying their company. How dare they find them first they're mine?! Then the hunt is on, and once the prey of choice is acquired, then what? Stolen candy never tastes as sweet. As stated in our text, "Animals, like humans, appear possessive and guard their mates closely as if they are motivated by jealous." I believe we are all motivated by jealous when it comes to our mate. There aren't many things more sacred in this world than the one you love, and if you don't watch out someone will absolutely tranquilize your girl with a blow dart like an elephant and harvest all that sweet ivory from her tusks. However, nothing in excess is good. Jealous can lead to delusion and many awful awful things. Overprotection of your mate could very well be what pulls you apart. So be wary of the sharks in the surrounding water, but make sure not to force your sweetheart to abandon ship.
Posted by Billek at 5:46 PM