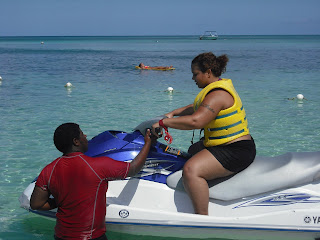 -behavior pattern that occurs in response to a stimulus and that achieves the satisfaction of a specific drive.
This past summer was one were I worked majority of the time. However, on my days off I picked up a new hobby, jet skiing. I live in Atlantic City and there aren’t any rental places here so I would go to Ocean City. I would say the first time I got on a jet ski I was absolutely terrified for my life. The power of the engine and speeding across waves was true adrenaline rush. I practiced every week just to get better. I fell off several times and pretty banged up on one occasion. I recently went on a Carnival cruise to Ocho Rios, Jamaica and Grand Cayman island. In Jamaica I snorkeled and scuba dived. Once we got to the Cayman Islands and I saw how calm the water was I knew I had to get on the jet skis. The water in N.J. is a dark blue and filled with seaweed. The water at the Grand Cayman’s was light blue with not a sea shell in sight. I got on the jet ski without an ounce of fear. I had to be at least a mile from the beach and to look down and see all the tropical fish as I skied past them was an amazing view. I even saw 3 dolphins at the end of my riding time limit. I did go back on the jet skis a couple hours later but was disappointed because the dolphins weren’t around. I would say that all my hard effort to learn how to ride in N.J. really paid off on my vacation, I felt a sense of accomplishment.
Posted by na'deidre at 4:34 PM