If you are like me, you wander why we make certain choices. You wander why we have counter factual thoughts, which are thoughts of wishing you could have changed a certain variable, the what if, would have , could have, should have. I like to think of the movie butterfly effects when I think of that word. 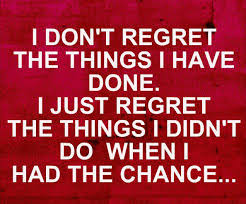 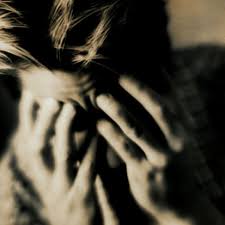 My worst regret is deeper than the tattoo of my daughters dads name I have on my thigh, by the way, I haven't been with him in 8 years. Yes, a dumb 18 year old mistake. I really don't care about that regret. The regret I have struggled with for almost a year is something that brings me to tears with deeper emotions than just regret. It is the regret that you play over in your mind and takes more than days to get over.

Last year, my Aunt Katie called me on a Monday to tell me my dad was in hospital and they found a spot on his liver. She also said they didn't know what it was yet and she would call me when they gave her the results. Wednesday, she called me and told me, my dad had stage 4 cancer and that he had less than a month to live.

I then was determined to go to Florida to see my dad and stay with him till he died.
First, since I just started my first semester of my bachelors degree, I had to go to my class on Thursday to make sure the professors would allow a month away or if I should drop the classes and start school the next semester. It was only the second day of the semester. Surprisingly they all were okay with me leaving for how ever long.
Second, I needed to get a flight, so I had a choice of Friday, Saturday, or Sunday... So since I am the worst decision maker in the world and of coarse wanted to go on Friday morning...I analyzed  my choices. I had to get babysitters for my children and so it seemed easiest to go Sunday. This worked out since I needed a day to pack and get all my stuff together thinking I would be there a month. I also had to work on Saturday night and I assumed I would need this money, being I wouldn't work for a month. I also thought I was getting sick so asked my doctor to prescribe me an antibiotic on fri...and xanax to deal with what I was about to go through...

Well I talked to my dad everyday he was in the hospital. Saturday night he sounded confused. He knew I was coming in the morning. As a result to going to work, the bar I worked at was so dead, I didn't sell any drinks in order to make money, so that was a waste of time.

Sunday 6 a.m. I am on the plane....11 am...I am at the hospital in Florida...I walk into my Dads room...and no one told me he went into a coma!!!!!!!!!!! After going into the bathroom and crying my eyes out, which by the way xanax doesn't help, not even for someone who never took it prior!!! I went to sit next to him till my aunt came and got me at 8 pm. I left with her...and we got to her house to get a phone call that he died as soon as I left!!! The doctor should have said he had less than a week from the day he found out he had cancer. He did come out of the coma for less than a quarter second to look at me half way through me being there, after nurse said your daughters here. So I don't know if it was a drug induced coma or what it was.
Okay so now that I learned that regret depends on the value of rejected opportunities, well it makes sense to me on why I would feel more strongly about this regret than any other regret so far. I feel as though one reason was partially choice overload. I had so many opportunities and different things to worry about before I made the most important decision. 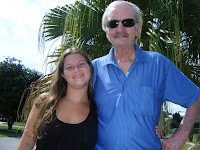 Even though I am very greatful to God and my dad that he held on till I got there, I still regret not being able to be there on Friday or Saturday before he was in a coma. It's helpful though to understand why I feel this emotion now.
Posted by Unknown at 5:17 PM