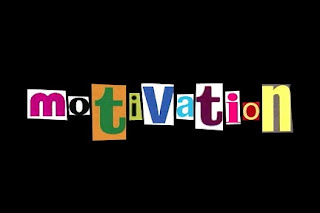 As I first came into this semester, I started off totally dreading that we had to read "Endurance" throughout the semester.  As we started the first section in the book, I literally had to force myself to continue reading as much as I didn't want to.  Well it turns out that reading this book wasn't so bad after all and as time went on the voyage became more and more interesting.  It  got to the point where I couldn't wait to pick the book back up and continue reading.  It also made me think that I haven't read a book like this together as a class in years and I actually enjoyed doing it.  Rather then just going over lectures each day and doing the same thing any other professor would do, this book helped to make the class much more "alive." When it comes to the lectures I learned a lot of new material that I didn't know before and then also refreshed my mind on material I was already familiar with.  I enjoyed the lecture on Homeostasis and never knew what it was or heard the word prior to this course.  I knew a lot of the material we covered on Chapter Four consisting of Addictions and Addictive Behavior.  However, one thing I did learn which I was never aware of before is the drug Naltrexone and just exactly how it works.
As a psychology major and a senior, I wanted to take the opportunity to take this class before I graduate from Stockton.  I can honestly say that I'm glad I did and I would recommend this to other students who are considering this course.  I have taken Professor Berg in the past for online courses and this is the first course that I have actually been able to take with him where I was able to hear his lectures in person. After completion of this course I can definitely say he is one of the better professors at Stockton and would recommend students to take motivation with him.

I wouldn't say that I have one particular favorite part of the course.  I enjoyed the course as a whole between the discussions on Endurance and the lectures that we went over each Tuesday.  I do like how Professor Berg "spices" up his lecture slides and it isn't just plain notes that we go over one after another.  He makes it much more interesting and easier to comprehend by adding YouTube videos or other videos that help better explain the material we are covering.  I myself am a visual learner and it helps to see pictures and videos along with the material so that I can grasp the concept better.  I enjoyed the discussions we had each week on Endurance.  I liked to hear other students feedback on the book rather than just my own.  I think that made it much more enjoyable to engage in class discussion rather then just reading the book and being quizzed on it or something of that nature.  One thing I remember from the beginning of the semester is how a lot of the class wasn't to interested in the book when we first started to read it.  At first I thought I was the only one, but then as time progressed I think each and every one of us became more and more interested as the voyage continued.  By reading this book it really made me stop to think that I need to not take every day things for granted.  We don't think twice about the things we in our lives such as food, clothing, and shelter.  The men went through such hardships where they literally had nothing, but no matter what their circumstances were they still kept pushing forward with every last bit of energy left in them.  It reminds me that no matter how bad things get, you should NEVER give up.  If you just hold on tighter and continue to give it your all then you have that chance of turning it all around.  With that being said, I will say that book is a perfect selection for this course.  If this story doesn't demonstrate the definition of motivation, then I don't know what does!

The following is a YouTube video on Sir Ernest Shackleton & The Endurance.  After completing the book I found this interesting to watch as well as the pictures that are posted from the voyage throughout the video. 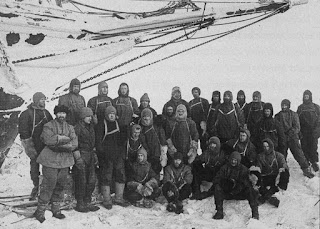 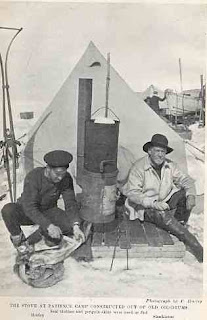 The Stove at Patience Camp Constructed out of old Oil Drums
Frank Hurley, left and Ernest Shackleton, right in front of their tent. 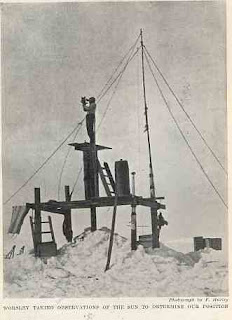 Worsley Taking Observations of the Sun to Determine our Position
The camps were far from static and drifted as the ice drifted carrying the crew of the Endurance a considerable part of the way to Elephant Island. 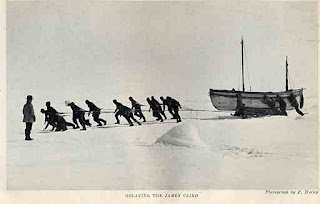 Relaying the James Caird
Named after one of the sponsors of the expedition, the lifeboat James Caird was to prove vital in the task of returning the crew of the Endurance to safety.
Posted by Unknown at 1:19 PM