One of the most interesting topics that we covered in class was the motives behind mate selection and the good gene hypothesis. Naturally, people was to choose a mate who is similar to themselves and possesses the qualities that they would like to see in themselves. The good gene hypothesis definitely affects mate selection.  The good gene hypothesis is a hypothesis that people prefer better looking people because they believe that these traits have good genes, genes in which they want to pass on to their offspring. (Deckers, 2010, p. 57) Since I aspire to be a couples therapist, I am really interested by this hypothesis.
Another interesting topic as part of mate selection is that we as humans like to select a mate who is around our attractiveness. If you consider yourself a 4, out of a scale from 1-10, 10 being the highest, you are more likely to select a mate who is one deviation higher, lower, or the same as you. Therefore, you’ll wind up with a 3, 4, or a 5. This poses a problem to mate selection because you cannot be with someone who you consider to be “better” or “lesser” than yourself. If you choose a mate who is better than you, you’re bound to be more possessive of your mate and think that you are not good enough. If you pick someone who you consider to be less than you, you’ll spend your life thinking that you could’ve done better. It’s a viscous cycle. To further research, I think it would be great to see if these hypotheses have any correlation in homosexual couples.
One of my favorite parts of this class was that we tied in the book Endurance. The novel really helped unify the class. I have not taken a class where the entire class reads a novel collectively since high school, and it was refreshing to share ideas about a common topic and get to know the class’ perspective. Although at first I was not a fan, the book shaped up to be really interesting. It was fun to come to class and designate a time to talk about the book. I feel like the ones who really enjoyed the book in the end liked the class a lot more. In a semester, we were able to build a community in the classroom setting. From this class I have made friends just from talking about the novel, and overall the class was very enjoyable. 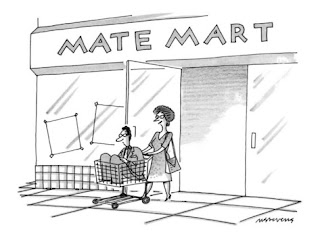 I shared this picture because I thought it was interesting if you take it into the mate value perspective. The woman depicted selected a mate who has VERY similar looks to herself. I'm sure there were some Brad Pitt-esue guys ate the mate mart, but she chose a man who was similar to herself.


Posted by Milo Campanella at 5:21 PM