Book Overview: The book I chose for the report is called The Willpower Instinct written by Kelly McGonigal. The book primarily focuses on the science behind human willpower and techniques that have been shown effective in enabling people to not only get more of it, but also how to manage it as well. The book does well to deconstruct many counterproductive things almost all of us do achieve our goals and uses scientific findings to show what works and what doesn't. Throughout the book McGonigal uses students who have taken her class with success as examples of how these techniques really do work and how we can apply them in our own lives. The book's primary focus is to help people better conceptualize their goals and to provide the most up to date and scientifically proven techniques that give people more willpower to achieve them.

Favorite Part: I am not sure that I have a favorite part, the book is very useful in almost all regards, but the part that stood out me the most regarded social contagion. Almost all of chapter 8 was extremely mind-opening as it related to how much our social interactions effect our ability to control ourselves. We all know that our social groups effect us, but what struck me most was the degree to which this effect takes place. At the beginning of the chapter she mentions a study that showed in the Air Force a new cadet's performance was better predicted by the least fit cadet than by their own pre-academy fitness level. This means that you could've been the best athlete in high school, if somebody in your squadron was performing poorly their performance significantly effected yours. Even watching television can invoke this contagion. The chapter talks about a study that used brain scans on smokers. When smokers simply watched another person on a screen light a cigarette the areas of the brain associated with hand movement became activated. This made me consider more closely the people I choose to associate with and luckily I do not watch television so I won't have to worry about picking up on the Kardashian's behavior.

Related: The book relates most to the first set of PowerPoint slides Impulsivity and Self-Control. These slides touch on the difficulties of controlling ourselves due to the conflicting drives that take place in us. The slide that talks about Ulysses and the Sirens is a great one in relation to the book as it shows a technique for enabling us to have more control over our actions. Ulysses and his men knew they would not always be in control as the Sirens singing was too tempting so they prepared for such circumstances when they did have control by tying themselves down. This is, put simply, what this book is all about. Not necessarily increasing willpower, though you can, but more about managing willpower and harnessing our potential through appropriate techniques such as preparing for when our willpower diminishes.

Applications in my own life: This book offers so many techniques to enable us to better control our behavior and achieve the goals we set for ourselves that applying them all would be difficult, though I am certainly trying. One thing that I have found particularly useful in the book was in regards to troubling thoughts that continue to push their way into our minds. This relates to a study by Daniel Wegner where he told subjects to not think about a white bear and sure enough that was all they could think of. Thought suppression is shown to have the opposite effect and I have always been a person to try and force thoughts out of my head. As it turns out, it is better to let these thoughts simply run their course and they will dissipate on their own. Forcing the thoughts out of ones head actually activates our brain to find more associations relating to them making it almost impossible to get rid of them. I have had amazing success with this and I surely wish I had known this sooner rather than later, but I am thankful nonetheless to know it now.

The book also motivated me to take up meditation again. Having meditated for almost a year I stopped two years ago due to falling back into poor habits such as smoking and drinking. The book motivated me to start again as the research surrounding the effects it has was extremely inspiring. I highly recommend this book to anyone interested in finding more will to do the things they truly wish to achieve in life.

Here is a picture of me in a meditative position: 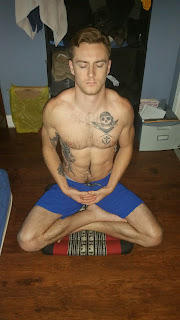