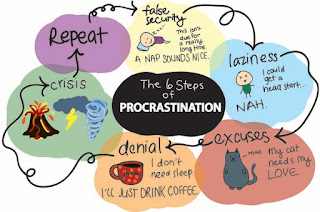 The first thing to come out of Eric Thomas mentions is that he does not believe in Procrastination. He stated to a young woman that if he would give her three million dollars for meeting him at five in the morning where would she be? She said I would be here thirty minutes before five in the morning. I know a lot of us that would say i will be there and even earlier for that kind of money. It's funny because we procrastinate all the time because things may not be important in our eyes. Procrastination refers to a delay in goal-directed behavior despite knowing that one will be worse off as a result. I procrastinate everyday when I tell myself I will go to the gym before I go to work and after work. I mean I set my alarm and press the snooze button telling myself that I will go the next day. I've been saying that since January. Procrastination will get you nowhere its just a lowsey excuse. Hopefully we all will stop procrastinating sooner than later. Procrastination leads to failure just like if your paper for a class was due at a specific time and date and you hand it in late. Well now your grade was lowered the the grade you earned. Just like if you did not pay a traffic ticket on time then they will suspend your license. Stop Procrastinating I promise your life will be much greater.