While learning about reproduction and why people chose mates the way they do, the structural powerless hypothesis stood out to me. This theory states that women prefer men with good financial stability, ambition, and industriousness because women have less economic opportunity. This makes sense as when women are looking for a partner, especially for the long term, they take into account his goals, ambitions, and career path. If a women is in hopes of one day starting a family, they want to be financially supported and know their kids are going to have stability, especially financially. It would be hard to believe if you heard of a women purposefully trying to mate with a man who cannot financially support her and potentially her children.

While this thought is always in our subconscious, I do also believe that in today's society, it is not completely the case. Part of this theory states women try to mate with men with high financial prospects because women have less economic opportunity. In 2021, women are definitely stepping out of their comfort zones of office jobs and house wives and going after big corporate positions and high paying jobs in engineering. Due to many women empowerment movements, it is fair to say that they are finally getting the jobs they dreamed of but never thought they could achieve because it was a "man's field." Not to say this new wave of women in higher paying positions will completely abolish this theory, but it does challenge some aspects, as women are now becoming more independent. However, due to evolution and basic human instincts, subconsciously women will always go for the more financially stable and ambitious option when choosing a partner. 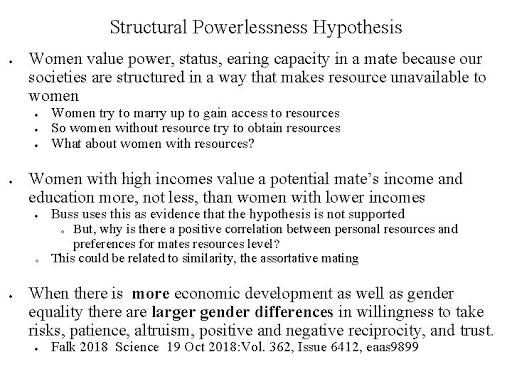 Posted by Gianna DiGirolamo at 9:43 AM