Book Report - PEAK - Secrets from the New Science of Expertise

PEAK: Secrets from the New Science of Expertise

Summary: Peak is written by Anders Ericsson, a research psychologist and professor, and Robert Pool, an accomplished science writer. The main point that this book tries to convey is that, in essence, "practice makes perfect". The authors theorize that there is no supernatural gift that certain/specific individuals are born with that allows them to succeed at a particular sport, instrument, or any other craft they participate in. They put forth the idea that with dedication, motivation, commitment, and patience, anything anyone puts their mind to can be achieved. The authors emphasize that each and every person on this earth is gifted in the sense that we all contain everything we need to succeed at whatever it is we choose. A common theme within the book is the concept of deliberate practice. If there is one thing you come away with after reading Peak, it is the importance of deliberate practice when it comes to achieving your goals. Deliberate practice is different from others forms of practice, such as naive practice, because it involves your full attention with the purpose of achieving your goal to excel at and improve your performance. Where other forms of practice may be without intention or thought, deliberate practice is intentional and systematic. The authors examine all different individuals who are the best at what they do, including renowned surgeons, child "prodigies", and professional athletes, and they conclude that the one thing these individuals all have in common, that got them to the top, is deliberate practice, nothing more and nothing less. They consider the criticisms of those who say "But what about natural talent?", and they provide real world examples of why natural born talent should not be credited for success. While height, weight, and IQ may contribute to success in a certain goal, they mean nothing without deliberate practice. This book does an excellent job of making you rethink your opinion on talent and success! 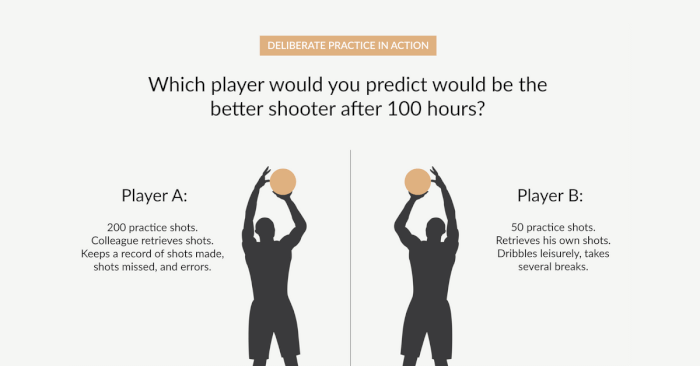 * In this YouTube clip from The Ellen Show, a girl is able to play the piano incredibly well, especially for her young age. Is her talent due to sheer practice, dedication, and commitment, or is she a natural born child prodigy with an innate gift? What do you think? Authors Ericsson and Pool, as referenced in Chapter 8 of the book, would say that her skill is due to deliberate practice and dedication to a craft that she loves.

Posted by Gabrielle Panza at 1:40 PM