For anyone who struggles with discouragement or poor self-image interfering with the ability to achieve one's goals, "Grit: The Power of Passion and Perseverance" by Angela Duckworth is the book to read. As the subtitle describes, grit is about enduring passion and motivation for the same top-level, long-term goal. As Duckworth explains, a top-level goal gives an individual a sense of purpose and defines meaning to every mid-level and low-level goal beneath it. Envisioning your goals in a hierarchy establishes a philosophy with guidelines to keep you on track. Giving meaning and purpose to lower-level goals is important in developing grit because the significance of your philosophy inspires loyalty and passion towards your goal that keep you moving forward (Duckworth, 62). Maintaining focus toward long-term goals and avoiding distraction from new ideas is crucial in growing grit because gritty people must persevere through completing long-term goals without loosing interest (Duckworth, 55). As the reader learns the habits and skills needed to grow grit, they are able to score their own grit on the "How Gritty Are You" quiz.

After completing the "How Gritty Are You" quiz, I wasn't impressed with my scores. I have always struggled with becoming distracted and not following through on projects. However, the proceeding chapter, "Grit Grows" addressed these negative feelings by explaining they derive from a fixed mindset, in which you believe knowledge and talent are simply fixed traits you either have or don't, and how fixed mindsets hold you back from expanding your abilities. A growth mindset, however, is the belief that abilities and knowledge develop through perseverance and hard work. As Duckworth explains throughout this book, grit and a growth mindset go hand in hand. It is impossible to become a gritty person if you allow your setbacks to hold you back from reaching your goals. Duckworth describes commonly receiving emails from people who wish they could be gritty but struggle to meet their goals. "A good place to start is to understand where you are today. If you're not as gritty as you want to be, ask yourself why"(Duckworth, 89). This was my favorite part of the book because it reasoned with me. Duckworth used the "How Gritty Are You" quiz to reach the reader's honest beliefs towards their own success so that she could address those unspoken insecurities that were brushed up in a direct manner in the following chapter. Understanding that grit grows inside you positively influenced my life. Duckworth goes on to explain that interest, practice, purpose, and hope are the four psychological assets of developing grit that all paragons of grit have in common. As I learned how these skills are shared by paragons of grit, I was reminded of Ernest Shackleton and the book "Endurance" by Alfred Lansing.

Ernest Shackleton was an Antarctic explorer who led three expeditions exploring Antartica. Shackleton is most well known for his Trans-Antarctic expedition because, despite being unsuccessful, he guided his crew to safety through remarkable perseverance. "Endurance," by Alfred Lansing, tells the story of Shackleton and his crew's incredible journey. The title is a reference to the name Shackleton gave his ship, in keeping with his motto "by endurance we conquer" (Lansing,17). Shackleton's endurance through trying times makes him not only a great leader, but a paragon of grit. Duckworth emphasizes the importance of persevering towards your goals despite setbacks: "Enthusiasm is common. Endurance is rare"(Duckworth, 58). After they were forced to abandon ship, Shackleton and his crew faced extremely difficult challenges such as wind storms, freezing temperatures, starvation, and dehydration. Shackleton persevered through these hardships while inspiring his crew to remain positive in their survival. While Shackleton demonstrated grit and hope towards his crew, he privately battled anxieties over his responsibility over his crew's safety: "He was careful, however, not to betray his disappointment to the men, and he cheerfully supervised the routine of readying the ship for the long winter's night ahead" (Lansing, 41). Duckworth emphasizes the importance of actions over words when demonstrating hope. Demonstrating hope through actions is important for leaders and parents because, as Duckworth states, "Children have never been very good at listening to their elders, but they have never failed to imitate them" (Duckworth, 183). Throughout the book "Grit," Duckworth explains that, while in troubling times it's only natural to have moments of doubt, the way you respond to those moments show how gritty you are. Shackleton's perseverance through challenging times towards his goal of his crew's survival as well as his ability to inspire hope and positivity through his actions makes him not only a great leader, but a paragon of grit as well.

"Grit: The Power of Passion and Perseverance" by Angela Duckworth was an uplifting and enjoyable read that left me with a changed outlook on my own ability to succeed. Duckworth shares her own story realizing that misconceptions on knowledge were holding her back in a friendly, relatable tone that allows the reader the comfort to be vulnerable with their own insecurities. Duckworth's use of the "How Gritty Are You" quiz to directly address negative feelings brushed up for the reader was my favorite part of the book because it really impacted my mindset. After learning that grit grows inside of you, I was interested to learn about the assets shared by paragons of grit. Ernest Shackleton demonstrates grit throughout his leadership on his Trans-Antarctic expedition; written about in the book "Endurance" by Alfred Lansing. I was reminded of Shackleton while reading Duckworth's description of gritty leaders. For anyone who struggles with poor self-esteem intervening with success, I recommend reading "Grit."

Duckworth, Angela. Grit: The Power of Passion and Perseverance. Scribner, 2016. 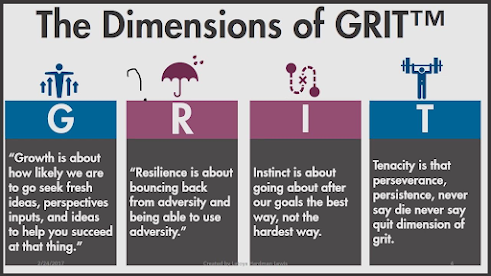