Two terms that are commonly used are reinforcers and punishers. By definition, reinforcers increase the likelihood of a behavior while punishers decrease the likelihood of a behavior. Extending upon these are the four terms: positive punishment, positive reinforcement, negative punishment, and negative reinforcement. (Jacob, 2021) Regarding the words positive and negative, they do not actually mean good or bad. Instead, positive means the addition of something while negative means the removal of something. An example of positive punishment is a mother yelling at her child for throwing a ball in the house. The yelling is the addition, and it is a punishment when the yelling decreases the behavior of throwing the ball. Negative punishment would be taking the child's favorite toy away in order to decrease the behavior of throwing the ball. Positive reinforcement would be giving a child candy for reading quietly. The positive part is the giving of candy in order to increase the behavior of reading quietly. An example of negative reinforcement is putting on sunscreen at the beach in order to not get a sunburn. The negative part is the removal of the sunburn which increases the likelihood of you putting sunscreen on. (Cherry, 2021)

Personally I feel that in the right situation and context, each type of reinforcement or punishment could be a good option. As a child, I recall positive reinforcement being used a lot. My mother would let me pick out a treat at the store if I behaved well. The treat was the addition that would increase the likelihood of me behaving well. 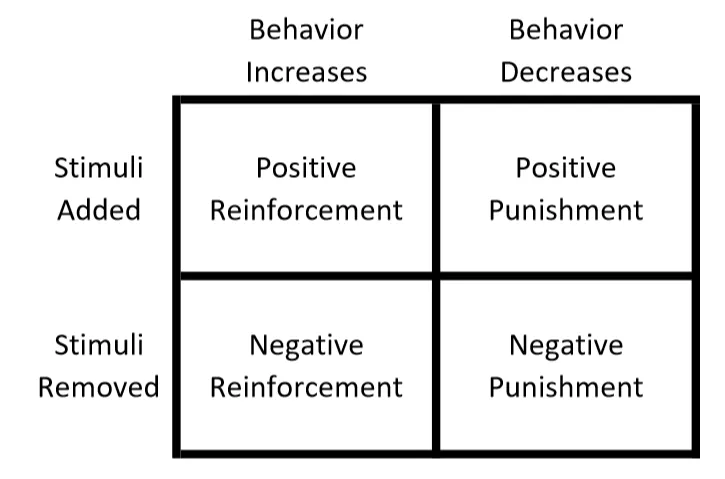