Charles Duhigg’s The Power of Habit is a book that covers the habits that us humans form along with sharing case studies and research trials. Duhigg divides the book into three chapter sections: The Habits of Individuals, The Habits of Successful Organizations, and The Habits of Societies. Duhigg describes the lessons that humans will need to learn to make a positive impact on their life. The first lesson is that once a habit is formed, it becomes an automatic routine. In order to change a routine, we have to become aware that it is a habit. The second lesson is about building strong habits to focus on a reward that can drive you to a more powerful habit loop. The third lesson consists of finding ways to make a new habit automatic and long-term. To do so, Duhigg's talks about The Goldent Rule of habit.

Chapter 4 focuses on important concepts of institutional habits where Duhigg uses two celebrities' stories as examples Paul O’Neil and Michael Phelps. In this chapter, Dehugg’s talks about how O’Neil saw routines to be fundamental to both successes and failures. As mentioned, one of the steps to a successful habit is reward and O’Neil’s instituted policy consists of cue, routine, and reward. This relates to a similar topic we have discussed this semester on self-control. In order to create a routine of habits, one needs to learn self-control. To have self-control means to be in control of your emotions, desires, and one's behavior, especially in situations where a routine needs to be placed.

This specific TED talk by Christy Baroni talks about The Power of Habit specifically focusing on her field of nutrition. Baroni talks about the many clients she sees who often wonder how or why they aren't losing the weight they desire. Baroni’s first question to her client is what habits or rituals exist before they go to bed. Many of her clients have habits that are unhealthy for one's diet and overall health. These unhealthy habits can look like coming home from a long day of work and opening a bottle of wine or preparing a cocktail while scrolling through social media content. The light emitted by our mobile devices can damage our serotonin and melatonin. She argues that many people's routines are damaging to their bodies and is the reason why many people wake up feeling unrested and stressed. Baroni’s message was that instead of creating unhealthy habits, change your habits into a healthy new routine. 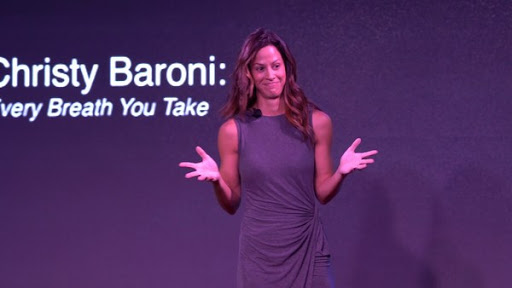 Posted by Sabrina Caban at 8:09 PM