“The Problems we face as a society and as individuals are rarely due to lack of empathy. Actually, they are often due to too much of it” (Bloom,2018).

Against Empathy written by Paul Bloom was oddly one of the books I read in my psychology class at Monmouth University before transferring over to Stockton this past year as a senior. As I was reading through the book list for the class selection, I knew this book sounded familiar and sure enough as I read the first couple of pages, memories of Paul Bloom’s spectacular and shocking opinions on empathy came flooding back.

Paul Bloom has a very interesting way about diving deep into empathy. Personally when I think of empathy I relate it to feeling another’s pain or being able to put yourself in their shoes with their situations. Paul would dispute this theory and express throughout each chapter that empathy is really just a way to manipulate, control and in his words “be used as a powerful force for war and atrocity towards others.” Paul also mentioned very different individuals and their stories to show hoe empathy effects both good and evil people. For example, he talked about Gary Gilmore a serial killer who has no remorse, Adolf Hitler and even Jesus Christ.

One of my favorite quotes in this book states, “this distinction between empathy and compassion is critical for the argument I’ve been making throughout this book. And it is supported by neuroscience research. In a review article, Tania Singer and Olga Klimecki describe how they make sense of this distinction: “In contrast to empathy, compassion does not mean sharing the suffering of the other: rather, it is characterized by feelings of warmth, concern and care for the other, as well as a strong motivation to improve the other’s well-being. Compassion is feeling for and not feeling with the other” (Bloom, 2018). Paul has made it very clear from the beginning of this book that rather than empathy to take a rational compassion approach.

Some key lessons expressed throughout the read included one of the specific lessons I had most trouble understanding until he elaborated. This is the fact that our empathy is extremely selective and super biased, often times we don’t even notice. Paul really wants us to think with our head and not our heart in most cases, helping others in a more logical based fashion which I found to be a really interesting take. He also shares that empathy can lead to some not great decisions. Empathy is simply a neurological response and Paul uses people such as Giacomo Rizzolatti, an Italian neurophysiologist to express this point of view in a scientific matter.

Overall, I found this book to be highly educational yet leaving room for numerous opinions, thoughts and even questioning your own views or beliefs. I always believed myself to be a true emapath and even after this book I will continue to approach the world leading with my heart but logically based which is a key point I took away after finishing. 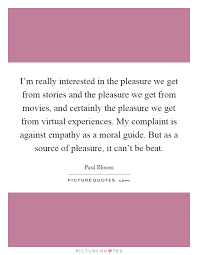 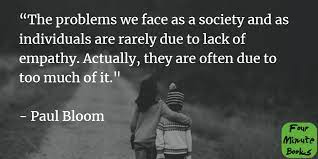 Bloom, P. (2018). Against empathy: The case for rational compassion. Vintage.

Posted by Emily Batastini at 8:09 PM