The Science of Self-Control

"The Science of Self-Control is a book that deals with behavior when it comes to self-control, willpower, temptation, indulgence as well as commitment. Rachlin places emphasis on addicts as well as everyday situations. Each part of the book is related back to an experience the general reader can relate to.  The book involves subjects such as motivation, ambivalence, commitment, patterns in behavior as well as a section on addiction and economics. In this book you will look at how to control ones behavior, self-knowledge willpower and habits.

My favorite part of the book was when he spoke about the alarm clock. Even though it went on for quite a few pages and was introduced in different topics. I could relate to the idea of placing my alarm clock on the other side of the room so that i had to get out of bed to shut it off. This was big in motivating myself to get out of bed. This allows you to control your behavior, have control over waking up on time and staying awake and it is a commitment forcing yourself to get up. I also enjoyed a few of the quotes that he stated throughout the book. The first one was "taking drugs to control a drug addiction is like swallowing a spider to catch a fly" (Rachlin, 2004, pg. 20). Another quote was "According to Plato, there is no fundamental difference between knowledge (cognition) and self control (motivation)" (Rachlin, 2004, pg. 134).

I thought this book related a lot back to the section on rewards and self-control. Learning to have self-control, self-knowledge, willpower and to release yourself from a habit is a huge accomplishment. The section on self-control relates to this book because it talks about self-commitment, as well as positive addictions and negative addictions. I believe that once you have learned to have self-control and are released from the bad habit that you had then their will be a positive habit. For instance, I believe that helping another alcoholic overcome their habit is a positive reinforcement. In the section about rewards, the matching law relates to this book. The basic principal of choice behavior allows those individuals to choose the behavior in which they are participating. It is a self choice in behavior. 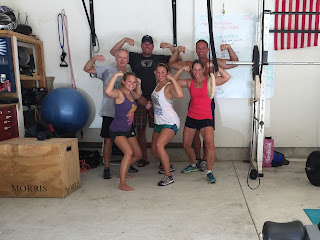 This photo relates to the book because, just like the alarm clock, exercise is something that I was not motivated to do. I tried for months to work out on my own and nothing was working, i had no motivation to exercise for more than ten minutes. Then I added a pattern into my life and I learned self-knowledge about the things that I enjoy doing. I grabbed a group of people that I could exercise with at the same time everyday so that it became a pattern in my life and eventually it because a positive habit. This allows me to have control over myself mentally and physically. Which is a great feeling.

The things that I have taken from this class and from "The Science of Self-Control" is going to help me in a career as a nurse one day. I will be dealing with patients who may be struggling with addiction, or teenagers who do not have self-control, or even mentally disabled individuals who have problems with self- knowledge. This information will help me to motivate them to getting better, as well as leave me feeling secure that I know the steps to take to help them.