book report - The Power of the Habit, by Charles Duhigg

The book, The Power of Habit, by Charles Duhigg, offers the reader hope to become the person, he or she has always wanted to become. There is an optimism throughout the book conveyed by anecdotes of familiar individuals and companies which owe their incredible personal and financial success to the simple formula of developing the appropriate habits as explained by Mr. Duhigg. Within a few months, or possibly several days, most college texts are thrown away or posted on half.com. The Power of Habit will remain on my bookshelf, not only for myself, but for family and friends. The reader believes the message of the author and is inspired to examine his life for growth and change.

Without a doubt, the most interesting sections of the book are the anecdotes of individuals Mr. Duhigg uses to illustrate the strength of his presentation. And despite the fulfillment of their dreams, the individuals all began their journey exploring different behaviors and habits which fueled their eventual success. Charles Duhigg describes the simple process of identifying a goal, discovering the habits which will facilitate the goal, then deliberately adhering to the habits to reach success. Every story is a story of a brain reprogrammed because of a goal and a belief that change is possible.

The story of Michael Phelps greatly clarified the explanation and the significance of keystone habits. Without the keystone habits established by his coach, his story may not have had the same conclusion at the Olympics. It was his reliance on previously learned and practiced behaviors under any circumstance, which allowed Michael Phelps to remain calm and swim to victory time after time. He never failed to visualize one small win after another before bed, when he was practicing, or when he was racing.

Another anecdote with power is the story of Starbucks. Their success may be largely attributed to embracing the same ideas as the author. The employees were all trained extensively in providing "fantastic customer service". And in order to provide this service, the goal was to create habits for all eventualities, even those extremely negative. Starbucks gave their employees willpower habit loops. These loops rely on the employee reacting in a specified way whenever the cue, or trigger, is recognized. One of the most amazing statements in the book is on page 130, and states "Starbucks has succeeded in teaching the kind of life skills that school, families, and communities have failed to provide". And Charles Duhigg provides the evidence to support this statement.

The book is inspiring and contains enough information to support a class within its pages. And although this report has focused on the more positive aspects of habits and how they may be changed, there are several topics addressed by the author which send warning signals about the use of this same knowledge to determine the consumer habits of individuals beyond the smile of the employee at Starbucks.


Attached to this report is a picture of an x ray of the  the metal plates put into my arm following a motor cycle accident. I think they look pretty neat. 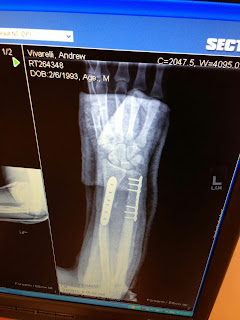