Power of Habit: Why we do what we do in life and business

The ability to understand the science and examination of a habit can be clearly identified in this interesting book known as the “Power of Habit: Why we do what we do in life and business”.  This book allows the reader to understand what a habit is and how habits generally run our lives without an individual ever noticing.  The author, Charles Duhigg, explains that 40% of our daily routine is made up of habits that have been ingrained in our minds.  These habits cause our body to run on a process known as auto-piloting.  Furthermore, the author continues to discuss the reasons for our habits and how to carefully examine the habits cues and true rewards.  Once an individual is able to identify the real reward behind the habit, the author dives into methods of modifying the habit (routine) in order to achieve the reward more quickly without repeating the same “bad” habit and replacing it with a “better” one.  Lastly, the author provides numerous examples in his book discussing large corporations and the extensive research that they administer in understanding your personal habits as a consumer.  For instance, Target is mentioned as a large corporation that spends endless hours researching and estimating the period of life that one may be experiencing such as whether people have recently bought a home or are expecting a baby.  Overall, this book is filled with great scientific data in understanding the biological make-up of habit formation and great stories that apply the concepts discussed extensively by the author.

The entire book was so vastly interesting, that it was difficult to chose just one part that was my absolute favorite.  However, one area of the book that I found to be extremely interesting was the back story involving Baptist Pastor Rick Warren and his journey in building one of the biggest churches in the world, known as Saddleback Church.  I have been a big fan of Rick Warren’s work in the ministry and even remember reading his book, “The Purpose Driven Life”, with my husband.  I found it interesting that the concepts that were associated in the “Power of Habit” were being utilized in Rick’s agenda of improving spiritual habits.  For example, due to large amount of people that were attending his church, Rick had no choice but to promote church leaders that would administer bible studies in their homes.  This was done for the reason of assisting Rick Warren in managing the church.  This modification of bible study in the homes of church leaders was indeed needed as it was reported that Pastor Warren suffered through stages of melancholy as a result of the stressors associated in running a mega church.  Furthermore, when Pastor Warren collected feedback of the bible studies, he discovered that many would spend more time focusing on gossip versus building spiritual habits that were aligned with Jesus Christ.  As a result, Pastor Warren implemented curriculums that would focus on habits that were considered Christ-like.  In addition, he included a signed agreement that incorporated three daily habits that every member would strive to accomplish continuously.   The three habits included moments towards reflection and prayer, tithing 10 percent of their income, and membership in a small group.  The idea of replacing past poor habits with these new habits allows the individual to be responsible for their spiritual habit, rather than Pastor Warren.  This part of the book allows me to connect the idea of reinforcement that was covered in our course.  Pastor Warren reinforced the congregation in maintaining stability in their faith by implementing the set curriculums in the bible study groups.  The curriculum allowed church members the ability to have their faith reinforced and to be motivated in becoming more Christ-like in their character every single day.

As stated previously, the concept of reinforcement and motivation relate heavily on the story of Pastor Warren and his church members during bible study.  However, another part that I found very interesting and relevant to our course was the observation of how fresh fruits and vegetables are strategically placed at the beginning of a super market.  According to the author, individuals who placed the healthy food items in their cart first were more likely to purchase junk food items before they left the store.  This in a sense reminds me of the concept discussed in class known as Health Halos.  Perhaps, the healthy foods in the individual’s cart justifies the decision of purchasing junk food since there is a high chance of an underestimation of calorie intake due to the notion that all fruits and vegetables are perceived as healthy.  As we know, the concept of health halos are naturally ingrained in us to continue the habit of assuming, for example, that a plate with a side of broccoli automatically makes a food dish “healthy”.  It is important to examine our decisions and to modify our habits in order to prevent the mistake of being involved in health halos.

I thought the following photo was creative and inspiring in accordance with the book.  If you are not a fan of “breaking bad” then this picture will not be as relevant.  However, I found this picture to be so true because the entire story of the hit show “Breaking Bad” is a Chemistry teacher desperately in need to break a bad habit that unfortunately, is unable to accomplish.  In addition, I have included a link of a video that includes Pastor Warren discussing the 5 habits of healthy people, which incorporate habit formations as discussed in the reviewed book “Power of Habit”. 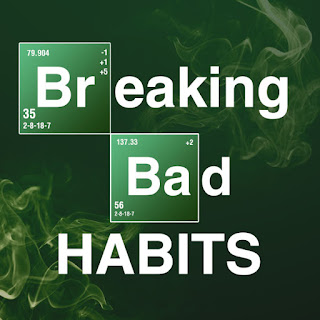 The ability to understand your habits and modifying them after close examination is a beneficial tool.  This skill and knowledge allows an individual to take control of their life while producing positive real world results.  Although, many habits vary in severity of self-control, we are able to apply the concepts associated in this book to battle many of our “bad” habits.  One in particular, which would target a real-world issue, is the increased rate of obesity in our nation.  Applying the concepts of identifying our cues and rewards in regards to our eating will pinpoint the possibilities of why we truly overeat.  I truly believe that this book would help individuals that battle with over eating because it will allow the reader to gain a sense of self-realization and responsibility over their decisions.  I enjoyed this book and would recommend this book to anyone who is interested in comprehending the idea of habits and individuals interested in replacing old habits with newly positive habits.
Posted by Unknown at 9:44 PM