The Motivating Effect of Cognitive Dissonance

Well first thing is first, looking at the posts of my fellow classmates here, I fully agree that this article is terribly written. I have read it two times, and in all honesty for me to even read something one time speaks volumes; so I actually made an effort to fully comprehend this article and only got a portion of it. That being said I fully understand the principle of cognitive dissonance. Check. The part where Festinger lost me was the entire experimental section. I found myself completely confused when I came upon both of the experiments that were conducted. The first one just seemed to be about a bunch of morons who halfway thought that the world was going to end and they were going to be beamed up into a flying saucer. I laugh as I type this but then I think about this past summer how a bunch of people seriously believed that the "Rapture" was going to take place and the world was on the verge of ending; so in essence these naive people really do exist. Now back to the point.

This article defines Cognitive Dissonance as the relation between cognitions which exist simultaneously for a person; the example provided is an intelligent, capable person who meets nothing but constant failure. The one thing that the author did here was the lone part of the article that I actually liked; he gave a good segway into how cognitive dissonance can be used as a state of motivation. Besides, isn't the point of this class to discuss motivation? Cognitive dissonance gives rise to activity oriented toward reducing or eliminating the dissonance, thus the successful reduction of the dissonance is comparable to eating to cease your hunger.

I have had several clashes with thoughts of dissonance; a somewhat recent example of which would be that two summers ago we made it to the championship game in my summer basketball league. We lost by 2 points and I happened to play very poorly that game. So during the fall, winter, and spring I dedicated myself to improving my game so that I would not make the same mistake the following summer. In terms of breaking this down (Festinger should try breaking things down once in a while), the cognitions going through my mind were: I am a very good player, but I cannot win a championship; so by practicing and improving and eventually winning, I was motivated and ultimately reduced the dissonance. I'm not one of those guys that attempts to preach my life story to the crowd, but I attempted to use this example because for me it was easy to use since I'm really 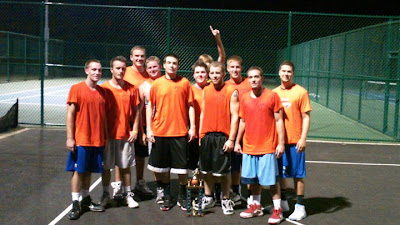 into sports.
Posted by Brendan Foley at 10:04 PM