After watching the video clip of Paula and Elise, identical twins separated at birth, and hearing of the the triplets they wrote about in their book, I decided to do a little more research on the triplets. There names are Robert, David, and Eddy and were separated by Louise Wise Services. The chief psychiatric of the agency, Viola Bernard, was the person who decided to conduct the study. They were all placed in Jewish homes, but obviously the study was abandoned, because they were never interviewed afterwards to make any observations.


Robert and Eddy met at Nassau Community College in Long Island, and soon after that David recognized the boys in the newspaper. Once the three reunited, they all shared many similarities: smoke Marlboros, enjoyed Italian food, like older women, talked alike, had similar IQ, and lost their virginity at age 12. 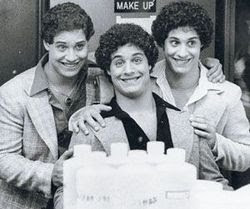 The three boys were separated at birth as an experiment on nature versus nurture, as were Paula and Elise. This was very unethical, because there was no consent. Although unethical, it did provide a lot of insight into the issue of nature vs. nurture. Even though the triplets did not know the others existed until they were in college, they behaved similarly and had similar personality and intelligence traits. This shows that nurture is more powerful than nature.

Together they ran a restaurant called Triplets in NY, and is now ran solo by David. In 1995, Eddy committed suicide. I am not sure about the other two men.
Posted by Jen Sinacore at 3:13 PM