Book Report on "The Power of Habit"

The Power of Habit, written by Charles Duhigg, focuses on the successful breakdown of habits by the implementation of a 3-step process. By understanding the elements of cue, routine, and reward and how they are interconnected, one is able to identify the triggers (as a result of cues) that cause a habit, therefore giving an individual the ability to recognize and avoid cues to deter the progress of bad habits. The book not only details the cues of changing bad habits, but also breakdowns the science behind the human craving for dopamine and the consequential surge of dopamine when the habit is achieved. This point is followed by the explanation of how, over time, the dopamine surge occurs when the cue itself takes place.

My favorite part mentioned in the book was the idea of breaking a bad habit or making a change in your life by planning in advance in order to know what to do when difficulty arises. By being proactive and identifying potential problems that may cause risk to a newly formed healthy habit, one is able to avoid feelings of being overwhelmed as a result of unexpected stressors. I also enjoyed the aspect of a habit directly affecting another habit, whether they be positive or negative. An example would be the food journal, and how writing in one daily could have a positive correlation with maintaining a healthier diet as a result of seeing, as a whole, what was consumed that day. This is also useful in that there is an element of accountability, which is imperative for change. By being organized and responsible in the decision to make a change and eliminate bad habits, positive habits will form as a result of individual self-discipline, therefore leading to success.

I think that this book can be helpful when it comes to the health and wellness of individuals. Diabetes and heart disease are two of the ten current leading causes of death in America. Eating habits directly effect health and well-being, therefore changing bad diet habits and implementing new, healthier diet and exercise habits will have positive repercussions. 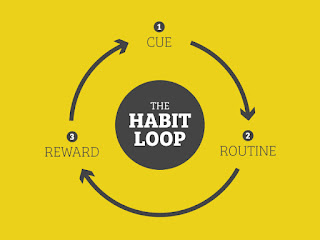