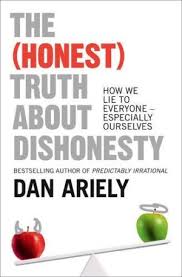 The (Honest) Truth About Dishonesty by Dan Ariely is basically a book about how, why, and how much, people will cheat on any given task or situation. Well, what he found was that it does not matter how much the reward is, it does not even matter if the likelihood of being caught is raised. The only thing that matters is a person's psychological distance from the act of cheating. Ariely suggests that though we think that we think about cheating rationally and weigh the consequences of our possible actions, no one actually does. He thinks that no one really cares about the consequences, no one really cares about the size of the payout, what really matters is how much guilt will your conscious be able to carry. 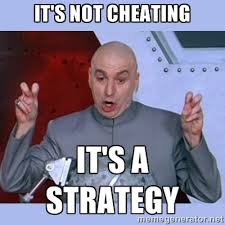 I had a few favorite parts of the book, the first being the "guest speaker" that Ariely brings into his class to talk about how to get rich. The second was the studies that Ariely did to come to his conclusoins. First, the guest speaker. The speaker comes to the class and essentially tells that that the best and easiest way to get rich is to cheat. He names a bunch of people who've cheated and been successful, then names a few people who got caught and what defenses they used to get out of their crimes. The speech is basically telling the class that they can be rich, by cheating, as long as they do not let any silly "feelings" get in the way. Throughout his extensive research Ariely has done numerous experiments, but some of the ones in this book are actually entertaining. The first major experiment is when he has students do matrices and offers to pay them up to $10 for 10 minutes. He does so many variations of this experiment and at one point introduces not only a paper shredder, but also a blind person. He uses as many different combinations of variables as possible to entice as much cheating as possible, but the crazy thing is that whenever a group cheated, they cheated the exact same as any other cheating group. No matter what the circumstances the groups always added 2 correct answers to whatever they felt the "average" number of answers were.

To me this book closely relates to self-handicapping, a topic that not only we covered in class, but also something that I have come to realize that I have done my entire life. Though on the surface they may not relate, if you look deeper you'll see that these people in the experiments that Ariely did were not only cheating for the monetary reward, they were also cheating for their own person esteem. Much like with self-handicapping the people are giving themselves something to save face, instead of pushing things off and giving themselves an out though, they are preserving their belief of being above average by saying they did above average work on the matrices. These two things are very different in how they are done, but can achieve the same result if someone is seeking the same goal.

All in all, the book can be used by all people to find their own reasons for why they would cheat, and find ways to be honest with others and themselves. It can be used to help the world rid itself of cheaters or, of course it can be used as a guide for cheating, once someone understands that if they distance their conscious from the act of cheating that it becomes easier, then they will become a more effective cheater.
Posted by Unknown at 9:30 PM