Addicted to the Internet 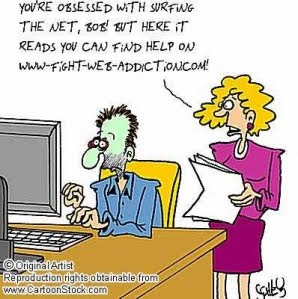 The internet can be pretty addicting. There is an endless amount of information to explore, people to talk to, magazines/books to read and videos to watch. The amount of internet usage has become so popular that basically every cell phone comes with internet now. Even game systems and tv are able to surf the web now. People can easily get sucked in for hours at a time and cause you to waste your day away. This has been seen as more of an issue as the years go by and although there is not a technical disorder formed, researchers are definitely looking into this problem a bit more. The term they used to refer to the internet overuse is pathological computer use. Clearly there is not an officially recognized disorder that is known yet, but they do have support groups and couseling for this "problem".
Doesn't it seem kind of silly? The world we live in has become very digital which I don't think is a terrible thing. I just think we lost the ability to communicate with one another. Instead of a phone call, e-mails and chatting online has become the more popular way of communication even though many things are interpreted the wrong way through the internet.

Are you reallying laughing out loud when you send "lol" to someone? And how do you understand the tone of the conversation if it is meant to be a worrisome comment and someone takes it as being rude?

Another aspect of the computer which I found to be pretty interesting is the fact that people are becoming more and more lazy, that now we have to abbreviate entire sentences! I am sure many of us are guilty of doing so. (ex: TTYL = Talk to you later.) Maybe this wouldn't be so bad, but students and even adults are starting to use this computer lingo in school work, professional letters, etc. You know it is becoming an issue when a student is writing a research paper a uses words like "ur" instead of "your" or "u" instead of "you". Does this necessarily mean there is an addiction forming? Of course not. Maybe people just need to get out a little more and spend some time elsewhere. Plus, it'll save your eye sight!
Posted by stk34457 at 8:41 PM