The Marshmallow test and Self-Control

The marshmallow test is such a great self control test at a young age. The children are giving a marshmallow and are told if they would like another, they cannot eat it yet. I think this is such a great example of self-control because there is something sitting right in front of them and they need to control themselves to not eat it. We use self-control in our lives all the time and I think it is important for people to have strong self-control. Self-control takes a lot of mindfulness and willpower. Howard Rachlin explained self-control by using alcoholics as an example of how no self-control will lead to more drinking even if they know in the end the outcome will not make them feel better. I think it is interesting how self-control is in almost every situation such as drinking/smoking or simply eating a marshmallow, this proves that self-control is important for people of all ages. "People who lack self-control often give in to impulsive behavior and emotions as well. This means that they may make poor choices that harm themselves or others and react poorly when they don’t get what they want." 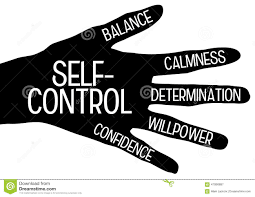