The Willpower Instinct by Dr. Kelly McGonigal was a very inspiring book to read and I thoroughly enjoyed reading it. The purpose of this book was to be able to help people from all over gain self-control and learn how to gain the willpower to live the lives they want. McGonigal begins by getting her readers to think about failure and the reasons why failure happens. It is overall important to recognize our failures as humans and figure out exactly what we are doing wrong, owning up to it and not placing blame elsewhere other than ourselves. McGonigal then breaks down willpower into three main categories known as the “I won’t”, “I will”, and the “I want” categories. Willpower can be defined as the ability to use self-control when needed, which is an instinct that we have developed as humans. The “I won’t” category is when you resist doing something that is not good for you. The “I will” category is when you delay gratification to help you reach your goals and get your reward at a later time. The “I want” category refers to long-term goals and their importance. With the author's breakdown of willpower, it appears that the “I want” category is very important when it comes to being successful in the long term.

McGonigal also discussed how humans have an alternate version of the “fight or flight” response known as the “pause-and-plan response”. McGonigal described how this response can be triggered when facing what is known as a willpower challenge, which is anything that challenges you in reaching your long-term goals. McGonigal then describes how this response then allows you to pause and reflect on the decisions you making by shifting your attention to inner conflicts, therefore giving you a buffer to make the better decision. Overall, this is known as the biological willpower instinct and it has the potential to grow and change. Although time this becomes harder to do and therefore it’s important that we eat healthy foods, meditate, exercise regularly, get quality/adequate sleep every night, and to also surround ourselves with others that have strong willpower as well. Overall this book is not about changing your life for a short period of time, it is about how to change/improve your lifestyle. It's about how we can become a better version of ourselves and make changes in our lives that lead us to happiness.

My favorite part of the book is when McGonigal discusses the topic of rewards and how our brains react to them. In which she discusses how the idea of being rewarded is often more sought after than an actual reward. During this part of the book, McGonigal talks about studies that were conducted on comparing the dopamine levels of people when they were thinking about being rewarded versus when they were actually receiving the reward. In which it was found that those who were thinking about being rewarded had higher levels of dopamine than those who were actually being rewarded. This often occurs when it comes to dieting and exercising. People often use the idea of a rest day/cheat day as motivation to keep them in their healthy routine throughout the week. The idea of what they are gonna eat, and what they will do during that time instead of exercising releases a significant amount of dopamine and happiness. Therefore the idea of just one singular day or moment of eating unhealthy has motivated a person for six days during the week. Then when they reach their “cheat day” they often feel guilty or unsatisfied after they are done and therefore their brains don't release as much dopamine as before. On the other hand, despite the fact that this may not exactly match McGonigal’s idea of how the thought of a reward can provide more satisfaction than an actual reward itself, there is an important connection I see between this idea and the book Endurance: Shackleton’s Incredible Voyage. During this journey, the men of the Endurance crew used their thoughts of reaching land and being rescued as their main form of motivation. Therefore, the men of the  Endurance crew used the idea of a reward to get them through the extreme challenges they faced during their journey in the arctic. Throughout the book, their biggest motivation, drive, and desire were to reach civilization and get rescued. This idea and the thoughts they keep alive in their minds about what they would do when they finally reached land truly kept these men strong and fighting each and every day to reach their goal. Despite all the cold nights, dirty clothes, rotting sleeping bags, hunger, and frostbite, these men used this idea of a reward to drive them through and survive until the day Shackleton would rescue the last of his crew on Elephant Island. Although the day of reaching land may have been extremely rewarding, just imagine how much motivation was created with just the thought of something that at so many points seemed so hopeless! It is absolutely truly inspiring what these men went through.

Overall, The Willpower Instinct by Dr. Kelly McGonigal was a truly great book to read and was extremely motivational. It truly helps you become more self-aware by looking deeply into your own thoughts, and feelings, and in turn, becoming more realistic with your goal setting and reaching. Willpower is also extremely important for society as a whole as well. As we as individuals become stronger and more aware of ourselves we can extend outwards to the community to help others in need. There are so many things within our society that need to be improved and with the strength and ability obtain with willpower we can positively impact the community as well. 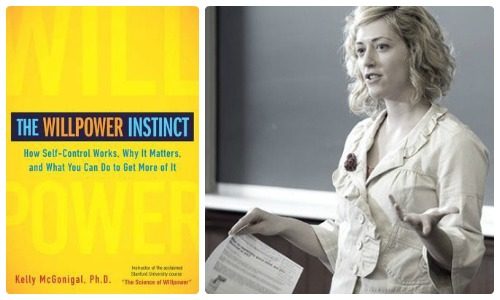 McGonigal, K. (2012). The willpower instinct: How self-control works, why it matters, and what you can do to get more of it. Avery.

Enjoy this clip of an interview with the author Kelly McGonigal about willpower!!!
Posted by Briana Harmon at 3:12 PM