The Willpower Instinct, written by Dr. Kelly McGonigal, dives into the different pitfalls of exerting willpower in everyday life and how we can use techniques to train our ability to take better control of our lives. McGonigal defines willpower in 3 distinct categories: "I won't" power, "I will" power, and "I want" power. "I won't" power refers to the normal definition most people think of when they hear the term willpower: our ability to break a habit or resist temptation. This type of willpower fits with goals such as quitting smoking or not binge-eating. On the other hand, if you want to get to something you've been putting off for a while such as cleaning your room or exercising, you would be practicing "I will" power. "I want power" refers to our ability to remember and stick towards a long term goal instead of falling for short term rewards. 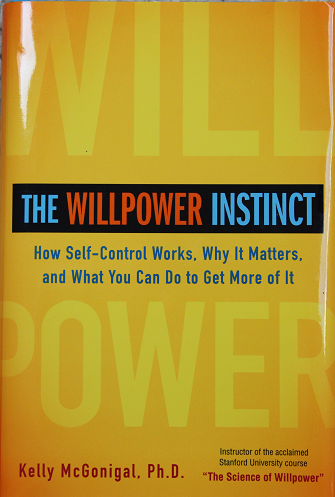 Willpower is like a muscle. It can get fatigued after repeated use and can be trained. Throughout the book, McGonigal explains different ways we can train ourselves to better practice will power through things such as meditation, "dopamizing" our willpower challenges, surfing the urge, and more. The book also explains phenomenons that lead us to self-control failures such as moralizing our goals, ironic rebound, or setting those future goals in ways that don't align with our future selves. For instance, when we consider progress towards our ultimate goal as morally good, we are more inclined to become susceptible to moral licensing. This means we may do something counterintuitive towards our goal based on the merit of our past "good" deed. This would be like eating an unhealthy meal after a workout since we earned it.
While reading the book, I learned that I made a mistake in my previous post "Impulsivity and Horny Rats." In Old's experiment with rats, he didn't find a way to stimulate pleasure in the brain of rats, but he rather stimulated the promise of pleasure. A common misconception is that dopamine is responsible for a feeling of happiness but responsible for the anticipation of reward or desire.  In a similar experiment with humans, the test subjects repeated the same results as the rats constantly pressing the button that stimulated the part of their brain wired with the electrode. They did not do this out of pleasure but because their brain was telling them that pleasure will come eventually if they keep hitting the button. This prompted the test participants to keep pressing the button well after the electrode was removed. The same type of logic can be used for a gambler. (Here's a relevant video: https://www.youtube.com/watch?v=qa_AhggFpHw )
While they may be at a net lose at the table, the dopamine being released in their brain is constantly telling them that the next hand just might be their big break and will bring them happiness. Dopamine can be both good and bad. Too much may lead to increased impulsivity, but too little can lead to anhedonia and depression. That's why one of the techniques to suggested by McGonigal to improve willpower is to "dopamize" your willpower challenge. This can be as simple as listening to music while cleaning or lighting a pleasantly scented candle.
I have not gotten much of a chance to put these techniques into action, but reading the book has supplied me with an arsenal of tricks and techniques to use to accomplish my own personal goals. One of my goals is too eat healthier and work out more. Eating healthier can be looked at as an "I will" power challenge since it evolves me adding healthier foods to my diet but also as a "I won't" challenge by weening out the unhealthier foods that I usually eat. For instance, we have a clear jar of Oreo's on the counter in our kitchen. My mother saw a video on Facebook and thought it looked nice much to chagrin of my father and I who constantly take several anytime we see it. It's the first thing we see on the counter whenever we are hungry, so we instinctively go for it first. Their are several ways to combat this challenge such as having a healthier snack like pistachios right next to it. I could also ask myself "is eating this oreo really worth throwing out my goal of losing weight" each time I take one instead of mindlessly taking a bunch. By doing this, I can slowly turn myself off from the idea of going to the jar and instead go for healthier alternatives.
Posted by Sean Martin at 6:08 PM