Incentives vs Stress and Drug Cravings

I found it interesting how so many ideas and theories could be related to one another among the chapters.  For instance, In Chapter 2, Deckers brings up External and Internal Sources and how they Induce Behavior.  One of the those theories is Warden's Incentive-Drive Link.  According to the Link "drives and incentives match up...These incentive-drive match ups mean that drive is a 'reaction tendency directed toward an incentive'" (Becker, 36).  In short, our drives are what motivates us internally, and the incentive is the external reward.  I know we have all had motivations that coincide with drives and incentives - like a relationship; it satisfies our physical needs for companionship, and it satisfies our inner drives for feeling loved emotionally connected to someone.

What I found to connect with this concept the most was Chapter 4's Stress and Drug Cravings section.  (Although its tied to the section of "Drug Relapses", it still ties into the idea of the motivations for drug useage).  It speaks of how drugs alleviate stress, and focuses on the point of PTSD ("the result of exposure to extremely traumatic events, such as physical and sexual abuse or combat (Decker 93)).  Longitudinal studies have proven that those who suffer from the disorder are more likely to become substance abusers.  The escape from their PTSD through drugs, is unfortunately what causes them to seek out higher intakes of those drugs or even stronger ones.  This is because the usage is so prolonged that it essentially numbs the individual to the effects.

Now...the connection is interesting.  I'll use the example of a war veteran suffering form PTSD.  This hits close to home for me because my best friend served in Afghanistan as a United States Marine.  Upon his return he realized that he had PTSD.  His symptoms included not being able to sleep/having nightmares, fear/anxiety in crowded places, and uncommon responses to loud noises such as fireworks.  I met him 3 weeks after his return, and since that time last year he has been able to make great strides in his recovery.  Some of his friends, however, were not so lucky with their progress, and have remained in the same dire state since immediately after their return.  And just as the text says, they have resorted to heave alcohol consumption. 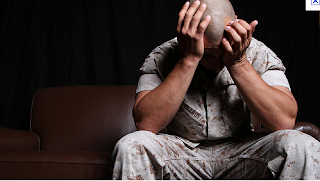 The Marine Corps holds drug testing, so obviously any traceable drugs or narcotics are out of the question.  Alcohol does not show up on the screening, but what happens when alcohol isn't anough?  The Marine's internal drives are to rid their memories and emotions of the terrible thoughts, and memories of their time in combat.  And in order to function in their external daily life, they need to suppress the onset of those feelings so that they continue to perform as Marines in the field and abroad (since many of them deploy more than once).  It is rare that a Marine will be exempt from their duties, especially combat affiliated, due to psychological trauma.  This is for the hard truth that it's what they sign up for, and is to be expected to some extend.  To sum it all up, if they don't quiet their thoughts and fulfill their physical expectations as a Marine, they are not only subject to shame, but to harm for themselves and the person standing next to them who is depending on them.

So to beat the tests, their motivations are so strong that they will resort to other drugs that can satisfy the desires and still carry the incentives of being able to perform.  One of these is by combining cough syrup with alcohol. 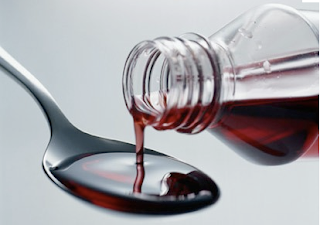 Commonly referred to as "Robo Tripping" (See this link for a quick overview - http://www.dxmstories.com/robo_tripping.html), which enhances a drunken feel, including adding to it with hallucinogenic elements and an "out of body" type of feeling.  And since it is an over-the-counter medication, it is accessible in often limited quantities, and legal for all ages to purchase (only a small percentage or drug stores hold restrictions against cough syrup and its purchase).  Even if a restriction applies, in most communities there is another drug store less than 2 miles down the street, so the acclimation of the drug is easy, and the ingestion pasts a drug test with flying colors.

There are clearly no limitations to the extent to which our internal drives and the external incentives will motive someone to use drugs.  Whether they risk jail, death, or even being dishonorably discharged from their military branch, sometimes those drives are too severe, and offer a clear and concise reason to continuously cross that electrical shock grid (as explained by Warden's Incentive - Drive Link) to get that end result of peace of body and mind.

(All images recovered from www.Google.com)
Posted by Theresa at 3:51 PM