In Willpower, research psychologist Roy Baumeister, and John Tierney report on experiments over recent years demonstrating that we have limited amounts of willpower, or self-control.  By using techniques to deplete this store of willpower, for example by having subjects refrain from partaking of desirable actions, researchers have found that as willpower wanes, performance on other tasks suffers as well.  The decline in our reserves of self-control also have a physical effect on the body.  Evidence shows that as self-control is used, glucose levels begin to drop, affecting mental and physical performance.  Similarly, not eating a healthy diet, stress, or lack of sleep can have a similar effect.  Self-control and critical thinking ability decline.

Baumeister and Tierney then offer tips for strengthening willpower, and having less depleted over the course of a day.  They also offer willpower strategies for dieting, raising children, becoming more organized, defeating procrastination, avoiding temptations, and (thankfully) improving study habits..Self esteem studies on children are also analyzed for effectiveness.  The importance of nutrition and adequate sleep is explored.  Actual individuals interviewed include endurance artist David Blaine, continuously challenging himself with feats such as encasing himself in ice for 63 hours, and musician Eric Clapton overcoming his alcoholism.  By presenting self-control experiments and their findings, case studies such as Blaine and Clapton, and examples of willpower being strengthened or lessened by certain seemingly simple actions like sitting up straight,  Baumeister and Tierney give the reader a good understanding of willpower, and the tools to strengthen it in their lives.

All through the book, I found examples I could relate to, and have personally felt, such as trying to study when tired, or sick, or when I had difficulty forcing myself to perform a task I know I should.  My favorite part of the book was the chapter, "Can Willpower Be Strengthened?", specifically the section pertaining to endurance artist David Blaine.  The interview with him uncovers how he grew up challenging himself physically, and by extension, mentally.  He felt willpower to be like a muscle which could be strengthened. So, he would not wear a coat in winter, took cold baths, and ran barefoot in snow.  He won swimming races by not coming up for air.  He slept on the floor, and began fasts at age eleven, for four days, and at age eighteen ten days. Basically, he was constantly setting new goals for himself to meet.

As an adult he has performed such feats as being sealed in a transparent box, without food, for forty four days.  Suspended above the Thames River, no less.  He achieved a Guinness World Record by holding his breath under water for 17 minutes, 4 seconds.    He was encased in ice for 63 hours.  He stood unsecured on an eighty foot high pillar for 35 hours.  Common in each of these stunts was that, toward the end, how difficult it was to continue.  Battling incredible pain, confusion, hallucinations etc. yet willing himself through them make his achievements even more extraordinary.

While I found the Blaine story most interesting, the discussions and experiments in this chapter could be helpful to me going forward.  It seems incredible that changing a habitual behavior, like if you are right-handed, forcing yourself to switch to your left hand to use a mouse, open jars, brush your teeth etc. for a period of time, such as two weeks, will increase willpower but experiments show it to be effective.  Similarly, beginning to exercise regularly and/or practice financial discipline increased willpower, and the stamina to continue to resist temptation when their mental resources were depleted.  Another good reason to work toward strengthening one's willpower is that exercising self-control in one area can improve many areas of one's life.  Unfortunately, researchers have not been successful in increasing intelligence.  It seems the intelligence we are born with is all we have to work with. 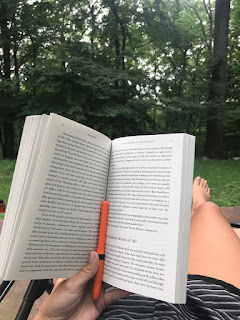 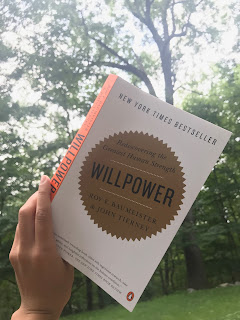 Posted by Christina Kaminskyj at 1:21 PM