A big topic that involves motivation and sparked an interest to me is bribery. I never thought about bribery as a motivation, but just a reward. Now, when I think of this, I think about how individuals are bribed as motivation to get something in return. The reward increases the likelihood of the behavior or action, which is a reinforcer. Reinforcers increase the frequency of the behavior. I began to think about when parents bribe their children to do something. For example, Common bribes are to clean your room or eat your vegetables in return for something positive. A website I found thought that parents should not bribe their children. 22% of individuals said parents should bribe their children, while 78% said not to. The individuals that said yes explained it was acceptable within reason. They saw it as a way to help them learn and said it was a motive to get them to do their best. The ones that said no said it is damaging and does not teach them responsibility. They believe that bribery doesn’t teach children to be motivated on their own. I can see how it might be compared to an incentive. This motivates a behavior to occur. 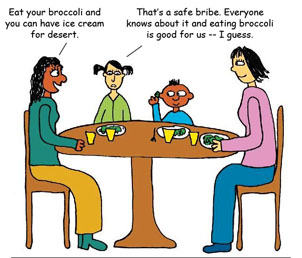