Self-Control and Food - My Story

In 2013, I had a problem with eating too much almost every time food was available to me. I certainly am guilty of delay discounting; not considering the consequences of eating junk food until I was full, but rather choosing to indulge in sugary treats for instant gratification. Within about six months, I went from a lean 195 pounds, to a soft, pudgy 230. Bondage is mainly what I used to break myself of the spell. I scheduled time for the gym and set alarms for both bed time and time to wake up. More importantly, I took control of my diet. I rid my fridge and cabinets of junk food - stuff like poptarts and hot pockets - and researched what kind of food I should be eating. I completely cut carbohydrates (and in turn sugar as well) and dropped my fat intake while increasing my protein intake. Chicken was a staple in my diet, since it was one of the leaner, more affordable meats available to me. Instead of barbecue sauce, buffalo sauce, or ketchup, I flavored my chicken with jalapenos. Prior to eating them every week, I had little desire to eat the hot peppers. However, due to my new diet, I had developed a learned preference for them. In another six months, I had completely redefined my body composition, all because I stopped discounting the reward that would come at a later date. 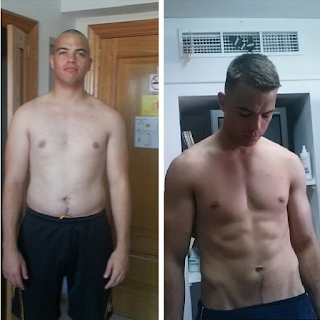