The Need for Caffeine 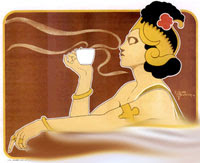 Caffeine is the most highly used psychoactive substance in the world. "90% of Americans report using caffeine on a daily basis." (http://www.myaddiction.com/education/articlesc/caffeine_addiction.html) More than 400 billion cups of coffee are consumed worldwide each year. What makes coffee so addictive? Caffeine can give off the feeling that you are awake, alert, and ready to take on the day which is a feeling that many people need after only getting a few hours of sleep. The downfall to this is if a person becomes addicted to caffeine, their system can suffer from withdrawal if they do not consume any form of caffeine.Withdrawal symptoms can last from a range of two to nine days. Also, a person can suffer from headaches and even depressive moods if the addiction to caffeine becomes very serious.
Caffeine consumption is addictive because many people consume caffeine on a daily basis such as soda or tea, but they do not see caffeine as a harmful drug like many other narcotics. Also, caffeine is easily accessible, even children cna purchase and consume products containing caffeine. If we consume caffeinated beverages in moderation there will be a lesser likelihood that we will become addicted.
By Lauren Raddi