After reading the first few chapters, something that really struck me was Mate Value. According to the text book "Motivation" by Lambert Deckers, mate value is defined as the possession of characteristics that are desired by the other sex. The higher the person's mate value, the greater the person's appeal. There are two attributes that describe the desirable characteristics. The first is Psychological features and the second is Physical features. The Psychological features desired in a partner mainly includes the personality , the morals, and the values of a particular individual. The part which struck my interest were the Physical features.Let's be honest, the first thing anyone notices about another individual is their physical attributes. However, men and women notice different attributes in the opposite sex. I'm sure some of us may have heard the idea that men subconsciously love women with big hips, however the media has portrayed a different story. Being that I happen to be a woman with big hips I decided to look into the topic and see for myself. 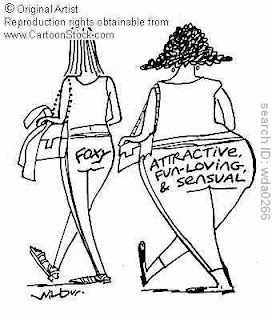 In a study done by Devendra Singh she discovered that one of the bodily features, waist-to-hip ratio (WHR), is a reliable indicator of a female’s reproductive age and sex hormone profile, ultimately enhancing their female mate value. Variation in the size of WHR also systematically affects the judgment of female attractiveness, healthiness, and youthfulness towards the opposite sex. After review of her study she finally came to the inference that most men are, in fact, more likely to be attracted to women with a larger WHR and that cross-cultural and historical data suggest that the relationship between WHR and female attractiveness is not culture-specific and not inculcated by modern fashion or media.

So I guess the next question would be why is the female WHR so intriguing to men and what exactly is encoded in the hip ratio? A big fat clue is to whether the person will have enough energy to care for and carry offspring. Many rumors I've heard on the subject is that most men are actually, subconsciously attracted to us women with bigger hips just because we are made for birthing children. So I guess we can assume that the ultimate moral of this study is that men may say they love women who are stick thin and are a size 2, but the women who get them in the end are ultimately the ones with the big hips and butts.